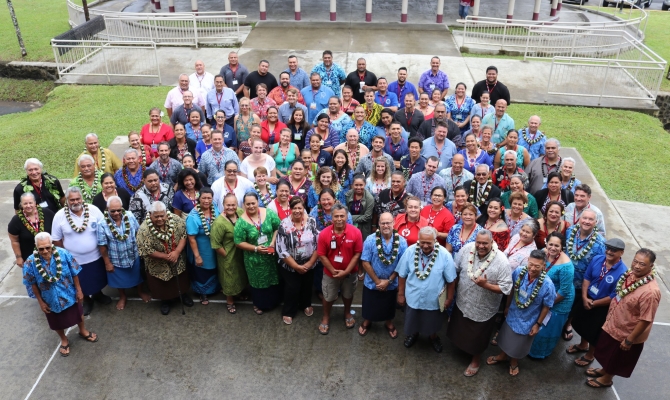 25 September 2019, American Samoa - The value of good relationships was stressed during a special talk from the Hon Togiola T.A Tulafono, former Governor of American Samoa who was in office during the 2009 tsunami.

The Pacific Risk Management `Ohana (PRiMO) two day meeting hosted in American Samoa for the third time since its formation in 2003, is remembering the American Samoa tsunami in 2009 as delegates plan to build resilience based on lessons learnt.

One of the strong messages shared by the former Governor was the value of good relationships.

“The most important thing I believed I addressed today is the fostering of the right and good relationships before disasters happen,” said Hon Togiola T.A Tulafono.

“That is what I have found, that these good relationships helped me deliver the tsunami recovery here in American Samoa in a very expeditious and efficient way that helped us get a declaration from our national government very quickly and helped me deliver the initial response immediately.”

The 2009 tsunami was generated by an 8.1 magnitude earthquake which occurred 120 miles southwest of American Samoa. It claimed 34 lives in American Samoa, damaged multiple properties, and caused millions of dollars in damages.

The sobering experience also highlighted the crucial role of NGO’s in the recovery efforts, the Hon. Former Governor learned when going forward that NGO’s are part and parcel of the critical partnerships for resilience.

As American Samoa remembers the 2009 tsunami ten years, tsunami preparation and awareness has played a major role in ensuring the resilience of American Samoa is strong.

“We need to prepare ourselves for tsunamis more often, and better.  Hurricanes you can see them coming and we are able to get prepared for them before they arrive but tsunamis require urgent action and movement,” said Hon Togiola T.A Tulafono.

“We’re only a few miles away from the Tonga fault it’s an active fault and I think we should be paying more attention to the threat a tsunami can bring.”

The theme of the PRiMO 2019 is ‘Weaving a path to “precovery in American Samoa, Fafauina o se alafua e toe fausia ai Amerika Samoa”, this guiding principal is at the core of the two day discussion helping to address risk management and how American Samoa can better respond to disasters, building upon experiences and lessons learned from previous disasters.

Meeting every year, this year is the third PRiMO meeting hosted in American Samoa for which the meeting will seek feedback and input on pre-disaster recovery and long-term disaster recovery planning.

A key feature of the PRiMO this year is the 2009 tsunami in American Samoa.

“Don’t let our guards down.  After all we could be called to responde to an event tomorrow or tonight you never know when it comes to earthquakes and tsunamis. It can happen.”