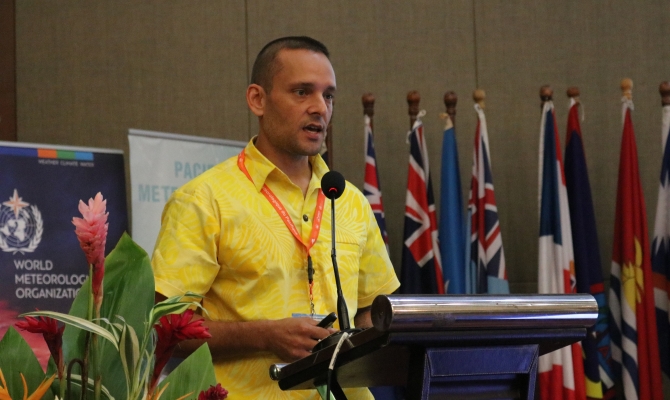 9 August 2019, Apia, Samoa – A consensus needs to be reached on the role of the Pacific Meteorological Council (PMC) and/or National Meteorological and Hydrological Services in monitoring, researching, educating and coordinating national and regional responses to Ocean Acidification.

Dr Robert Duncan McIntosh presented a working paper drafted by the Pacific Islands Marine and Ocean Services (PIMOS) Panel of the PMC which stimulated discussion during the afternoon session of the 5th meeting of the PMC, PMC-5, which is being held at the Tui Atua Tupua Tamasese Efi Convention Centre in Apia, Samoa.

Ocean Acidification occurs when the emission of carbon dioxide into the atmosphere is absorbed by the ocean, changing the chemistry of seawater.

The PPOA project is a collaborative effort between the Secretariat of the Pacific Regional Environment Programme (SPREP), the University of the South Pacific (USP) and the Pacific Community to build resilience to ocean acidification in Pacific island communities and ecosystems. It is supported by Government of New Zealand through its Ministry of Foreign Affairs and Trade and the Government of the Principality of Monaco.

The PI-TOA, a regional hub of the Global Ocean Acidification Observing Network, provides a platform for increased collaboration and communication amongst the various Pacific island countries and territories., a need that has been identified as capacity for ocean acidification monitoring increases in the region.

Members of the PI-TOA are currently involved in researching and monitoring Ocean Acidification at USP and other national universities and research stations around the region.

Director of the Samoa Meteorological Service, Mulipola Ausetalia Titimaea, also added that the Samoa Met Office is currently in discussion with the Samoan government regarding the establishment of a national-level body for coordination of Ocean Acidification work in Samoa.

But there is a need for more work to be done.

Dr McIntosh concluded by saying that “The PMC recognises that this is an important area for investments and calls for more donor support for regional and national-scale Ocean Acidification work to address the needs of countries in addressing Ocean Acidification.”