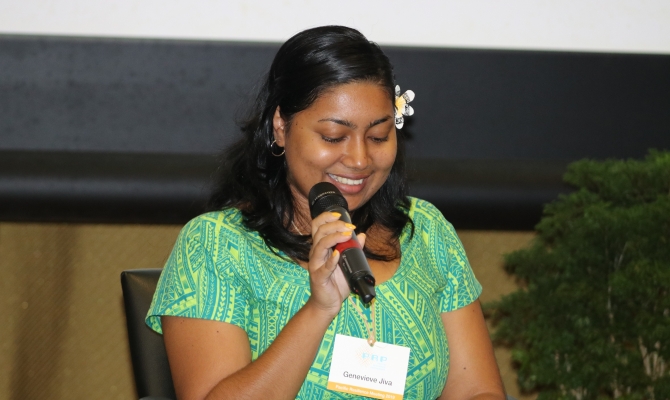 Young people have the potential and energy to be involved in low carbon development and climate change. All they need is the opportunity to be included and have their voices and perspectives heard.

This message was driven home by Ms Genevieve Jiva, Pacific Island Climate Action Network Coordinator for Oxfam in the Pacific, on Day Two of the inaugural Pacific Resilience Meeting, which is taking place under the guidance of the theme “Youth Futures in a Resilient Pacific.”

Ms Jiva said issues such as low carbon development, climate change and resilience matter to young people because; put simply, “it is our future and the future of those who will come after us.”

“We want to be given the chance to stay in our islands and to show our children where we grew up, and give them the opportunity to see the same beauty we see in our Pacific islands.”

But she made clear that, while young people are willing and eager to be involved in this context, they need support from existing players in the forms of finance and resources, but even more crucially, an enabling environment for youth to be able to share their perspectives on these issues.

She spoke on the increase in youth activism in climate change seen around the world, and stated that the Pacific youth have been involved in climate change for many years, and that the worldwide engagement shows that there is now more recognition of the issues that Pacific islanders have been facing for years.

“Our young leaders are working to build a better future, but we have much to learn. We are learning everyday as we research, clean up, march, advocate, and we will win this fight – but not alone. We need those who have been part of this journey for years, elders, to fight for us and for those who will come after.”

Ms Jiva identified three simple yet significant actions that can be taken to ensure that young people are meaningfully engaged in this context.

The first was to include a youth representative on the Pacific Resilience Partnership Taskforce and secondly, to include at least one youth in all climate and resilience-related meetings, panels, seminars and workshops nationally, regionally and internationally to add a youth perspective which will greatly benefit the discussions.

Finally, she wanted to promote meaningful engagements and programmes to train young people on leadership issues along with experience in negotiations and prepare them to assume leadership roles and positions in the future. These programmes will provide young people with training and real world experiences as well as the skill sets to be able to represent the Pacific and continue the fight for Pacific survival.

She concluded by saying, “Together, we can transition to a future where the Pacific still exists, because anything less is unacceptable.”