Climate Change Tools to assist with development planning and design 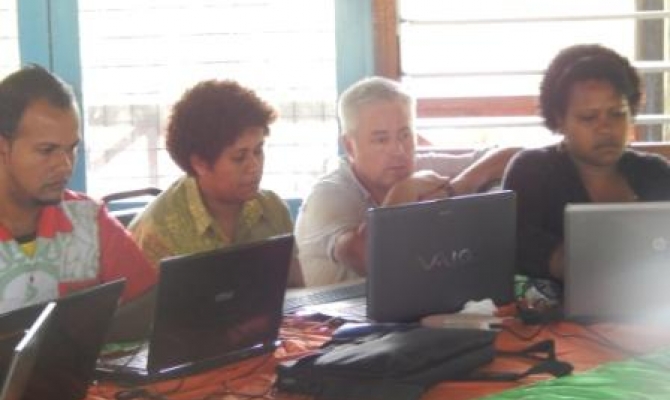 General News
New tools to help assess and manage the impacts of high rainfall and high tides were introduced to agriculture officers and engineers from the Land and Water Resource Management Division at a workshop in Fiji in December. The tools will help them to incorporate complex climate data and climate predictions into their day-to-day decision-making. The workshop was organised by the Pacific Adaptation to Climate Change (PACC) project in partnership with the Fiji Ministry of Agriculture.

Opening the workshop, Fiji's Permanent Secretary for Agriculture, Mr Ropate Ligairi, said "Climate change is a critical issue facing our region. In the past two to three decades, climate patterns have significantly changed in Fiji with high intensity rainfall, long duration, erratic season time, drought and sea level rise. These effects contribute to the threats on the agricultural sector, such as crop damage, and declining agricultural production as the majority of agricultural commodities are grown in the flood plains and the deltaic areas."

The PACC project in Fiji is focusing on these vulnerable low-lying areas and demonstrating adaptation measures that can increase resilience for communities, especially in relation to agriculture and food security. The project has two pilot sites, at Nakelo District in Tailevu and Deuba District in Serua, both delta areas that are prone to flooding and saltwater intrusion during heavy rainfall and high tides. Both sites had drainage schemes constructed around 30 years ago, which enabled crops to be cultivated in areas that were previously too marginal for agricultural activities due to waterlogging and flooding. These schemes are now in need of upgrading.
The project has been working with New Zealand's National Institute of Water and Atmospheric Research (NIWA) and engineering consultancy MWH (NZ) Ltd to develop technical tools that can be used by government planners and engineers to take account of the current and future climate. "The challenge is to translate climate change information so that it can be used in local-level decision making" explains Doug Ramsay, NIWA's Pacific Manager and co-facilitator of the workshop. "We're hoping these tools will help with this." 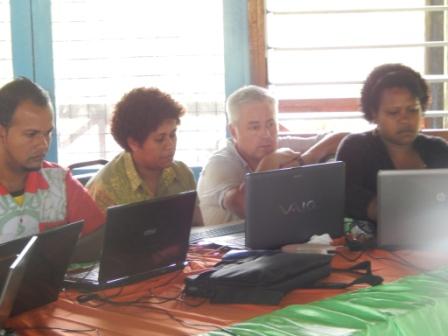 NIWA's Doug Ramsey with some of the workshop participants

One of the tools, the 'rainfall calculator', has been developed using historical rainfall data from the Suva-Nausori area. Its use is currently limited to that area, but can in future be extended by including rainfall data from other parts of Fiji. The workshop participants were shown how to input data representing possible future conditions, in order to predict future scenarios in terms of high tides and extreme rainfall. These can then be accounted for in design of, for example, drainage systems.

"These tools will contribute to more robust designs that should stand up to climate change in the coming decades," says Doug. "They are particularly useful because you don't need to understand the complex science behind climate change to use them."
Fiji is one of 14 countries that are participating in the PACC Programme, which is the largest climate change adaptation initiative in the region. Projects under the Programme focus on one of three key climate-sensitive sectors – food security, water resources, or coastal zone management. The Programme is funded by the Global Environment Facility and the Australian Government with support from the United Nations Institute for Training and Research (UNITAR) Climate Change Capacity Development (C3D+). The Secretariat of the Pacific Regional Environment Programme (SPREP) is the implementing partner, and the United Nations Development Programme acts as implementing agency.