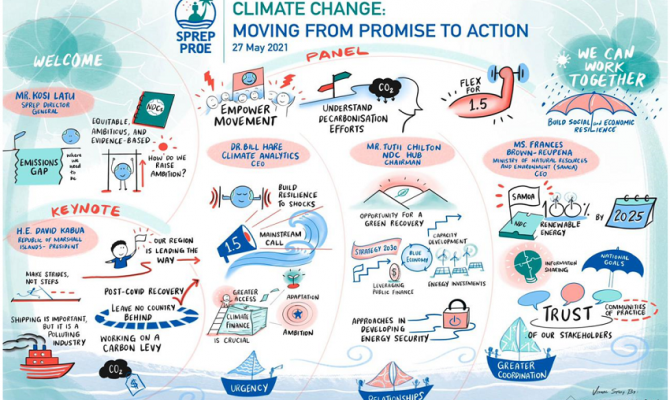 27 May 2021, Apia, Samoa – The decarbonisation efforts undertaken by the Pacific in a bid to continue to be leaders of the global climate change fight were highlighted during the “Move from Promise to Action” webinar hosted by the Climate Change Resilience programme of the Secretariat of the Pacific Regional Environment Programme this afternoon.

The webinar is the first of a series of webinars hosted by SPREP across 2021, which aims to help drive Pacific conversations about environmental issues during the time of COVID-19.

His Excellency David Kabua, President of the Republic of the Marshall Islands, delivered the keynote address which reminded participants from the Pacific and around the world of the importance of undertaking urgent climate action.

“There is no better time for us to be talking about the need to move from promises to action. We in the Pacific know the urgency of the situation. We have always been leaders on climate change because of the threat it poses to our lands and oceans, our people, and our culture,” President Kabua said.

President Kabua added that he was honoured to attend the recent Climate Leaders’ Summit, hosted by the President of the United States, Joseph Biden, on behalf of the Pacific islands region, vulnerable countries and the High Ambition Coalition. He also stated that he was heartened by the new targets set by the United States and United Kingdom, as well as the recent G7 announcement on the decision to halt overseas coal financing, which he said are crucial steps in the right direction.

“But we need to be making strides, not steps,” he was quick to add. “Despite the signals of progress, action to address this existential threat is still far from where it needs to be.” 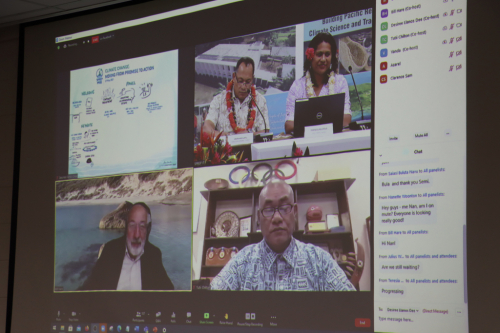 The webinar included a panel discussion, which aimed to empower movement from “Promise to Action” for Pacific islands survival, and talk to the decarbonisation effort underway across the Pacific islands to meet the 1.5 global warming goal. It also aimed to encourage everyone to “flex for 1.5” by reiterating why we need ambitious climate targets, the urgency behind this and how we can achieve our targets with collective political will; and finally, to understand the way international emissions impact our Pacific islands people.

Dr Hare spoke on decarbonisation in the Pacific and what that would entail in order for the Pacific region to continue to be leaders of the climate change fight.

“In the Pacific, getting emissions to zero won’t matter for the global climate at all, being such a small fraction of emissions. However, if we can get emissions in the Pacific to zero, it provides a very large demonstration effect to the larger emitters around us. We know historically that action by small island states have embarrassed and encouraged others to go further and faster,” Dr Hare said.

He also revealed that decarbonisation is also about development and economic growth and employment, stating that by decarbonising economies, big or small, will lead to significant economic opportunities and often to increased job outcomes and greater economic resilience.

“We are all suffering, Pacific islands particularly and other small island states, from the COVID-19 pandemic. Moving towards decarbonising economies in the Pacific will mean we will be reducing fuel imports and relying more on locally produced energy and energy resources,” he added.

Mr Latu also posed the question of what the Pacific needs to do now in order to survive tomorrow, to which Dr Hare responded about the need for the rapid scaling up of adaptation measures and projects, which need to be designed from within the local context and need to be linked to greater access to climate finance.

Ms Frances Brown-Reupena provided a country’s perspective on the decarbonisation of the energy sector in Samoa, where she noted that Samoa, through its intended Nationally Determined Contribution (INDC) in 2015, committed to decarbonise the electricity sector by generating 100% from renewable energy sources by 2025.

She also revealed that there are other initiatives carried out by Samoa, such as their Two Million Trees campaign, where they aimed to plant two million trees by 2020, a target that she was pleased to note has been exceeded, with 2.3 million trees planted to date.

Our Pacific islands need financial resources to achieve massive sectorial transformational change, and how this can be achieved during the COVID-19 pandemic.

“One of the obstacles we face as Pacific islands is that we’ve always been slightly isolated from the rest of the world, so this COVID-19 time is nothing new. But we cannot allow the pandemic to stop the momentum that has created the specific opportunities for green recovery through investment in renewable energy.

Mr Chilton stated that the region can create much more employment and income as a way to address not just the COVID-19 issue it is currently facing, but to address the issue of economic growth which was brought up earlier in the webinar.

He concluded by saying, “Pacific islands need to start taking the driver’s seat and driving the agenda. We did that with the development of the Paris Agreement and creating the NDCs, and again by creating the Pacific NDC Hub in 2017, and we need to do that now through this COVID-19 pandemic.”

The full “Move from Promise to Action” webinar can be found on Facebook Watch at this link.