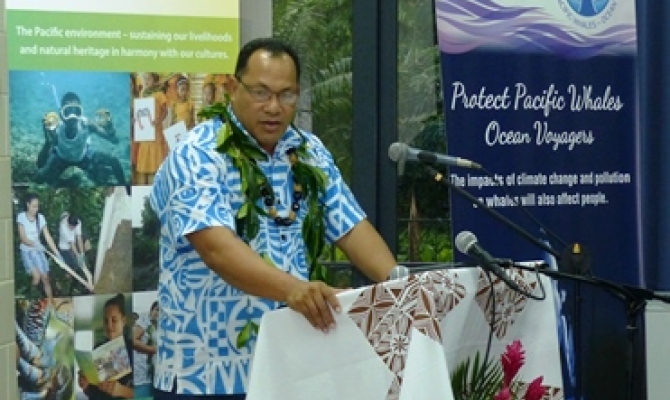 Speeches
It's a real pleasure to welcome you all today to the Protect Pacific Whale's - Ocean Voyagers Campaign, which will be our organisation's theme for the next two years. I would especially like to acknowledge and thank the Deputy Prime Minister, also the Minister of Environment, Hon Fiame Naomi Mata'afa for attending this evening and agreeing to formally launch the Year of the Whale.

Over the years SPREP has worked with our member countries and partners to implement regional campaigns to raise awareness of a particular environment issue in our Pacific. These have been a combination of both communications awareness and an increase on focus and work on the ground in these areas. 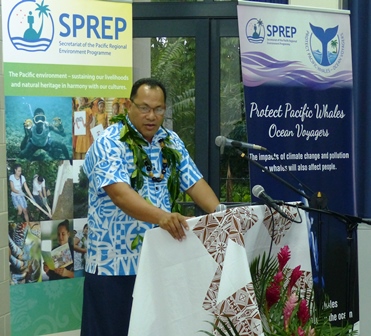 Through the Protect Pacific Whales Campaign we aim to work together with you all, across our region to highlight the importance of whales to our Pacific islands, to celebrate these magnificent creatures and to strengthen whale conservation efforts. While we have the spotlight on Whales, we will also ensure that light shines on all marine species as well as overall ocean conservation. What happens in the oceans will inevitably impact whales and Pacific Islanders.

Our region is home to over half the species of whales and dolphins on Planet Earth, and the most recent species to be described came from a specimen in Kiribati, so it is very appropriate that we should put a particular focus on whales over the next two years. Whales are awe-inspiring creatures - so much about them is superlatives - their size, their migrations - did you know that a humpback whale will swim the equivalent of the moon and back in its lifetime? We also know of at least one whale that overwintered in American Samoa one year and in the waters of Ecuador the next.

They even have their own culture - male humpback whales sing a complex song while on their Pacific over-wintering grounds, and this song is modified every year as it gradually spreads from west to east across our region in an example of fashion in the animal kingdom.

20 years ago, as the global Save The Whale campaign gathered strength, SPREP members were at the forefront in declaring national whale sanctuaries, which now cover over 12 million square kilometres of our region. Whale populations, which were at that time severely threatened, are now recovering and have become the focus of economic activities that benefit coastal communities of many SPREP Members.
I'd like to acknowledge the efforts made by our Metropolitan members - Australia, France, New Zealand, UK and USA - at the International Whaling Commission, where their efforts have helped to turn the tide. We are looking to them to provide technical and other support to our Protect Pacific Whales campaign.

We'd also like to thank you, all of our SPREP Members for uniting and endorsing this campaign at our SPREP Meeting in 2014. Without this interest and support, this campaign would not be able to sail successfully ahead. We all need to come together as a Pacific family and help navigate the course ahead together, thank you for being part of this crew.

While there is plenty for us to celebrate, the Year of the Whale is aiming to do more than that - there is a Maori proverb, Tere Tohora, Tere Tangata - where whales voyage, people follow. This was important to the voyaging canoes that carried people to formerly uninhabited islands in our vast ocean, but it is also true of the times we live in, for whales are sentinels of our oceans. Many of the threats they face in the 21st Century are shared by Pacific Islanders.

So we have developed an ambitious work programme for our Protect Pacific Whales Campaign, an exciting mixture of science, management, art and celebration. There is so much to do, and currently we are light on the funding, so please help if you can.

But tonight, please enjoy yourselves and the beautiful images you are about to see as we launch the 'Protect Pacific Whales – Ocean Voyagers' Campaign.