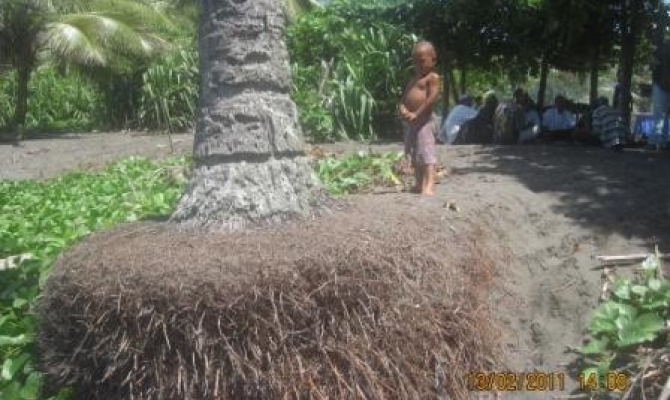 The term 'Climate Change' is not just an abstract to the people of Kivori, it is their daily challenge. Located some 130 kilometres west of Port Moresby, Papua New Guinea, the community is a six hour drive from the capital, but much longer on a wet day that tends to worsen the impossible muddy road.

The Kivori community is a pilot site for the Pacific Adaptation to Climate Change (PACC) Project, nationally implemented by the Department of Agriculture and Livestock of PNG, with the United Nations Development Programme (UNDP) as its implementing agency in partnership with the Secretariat of the Pacific Regional Environment Programme (SPREP), and funded by the Global Environment Facility (GEF).

Over the years Kivori have suffered from two extreme weather conditions, flooding on one hand and drought on the other. It has now reached a point where these two extremes have become impossible to predict its seasons. 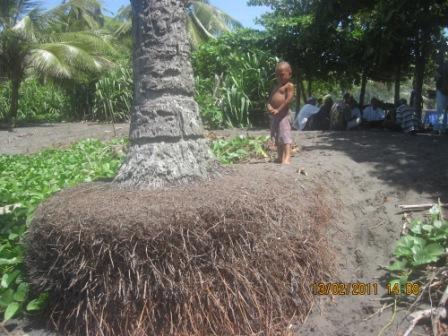 "They have mentioned that in a lot of the interviews and also the core group discussions that climate change not only changes how they do things like planting and so on, it is also changing where they are actually planting. So the issue of unpredictability becomes a real problematic one for them."

He added that this becomes a huge challenge for communities like Kivori where cash do not come easy, and they do not have the opportunity to market their produce in Port Moresby due to the poor road conditions and transportation, all put together equates to the very high vulnerability the community is facing.

With the support of the PACC Regional Unit of SPREP, the DAL PNG has begun the Project in Kivori firstly carrying out the Socioeconomic Assessment in the four villages.

PACC National Coordinator Mika Andrews said the findings confirm that the villagers are aware of the change in climate, and not only has drought been in existence in the villages but it has lengthened over a period of time.
"The people have been born into an area where there is drought experience every year but they say the drought has lengthened and so forth, the impacts of climate change are real in the lives of the people at Kivori.
"Our trip here was to conduct a household survey on the Socioeconomics situation of the people of Kivori who are under the PACC Project. We are one of the 13 countries who are taking part in this project; that is why we are here collecting data.

He added, "We were not able to cover all the households because of the time, but we have a good number to make our survey non-questionable in terms of the number of people that we covered in each village."

As the PACC Project kick-starts this year, the PACC Regional and National team are considerate of every aspect and complexities of the peoples' livelihood and surrounding. After carrying out the socioeconomic assessment, the Project team realizes the multitude of problems they face daily, needing careful consideration when designing the PACC Programme for Kivori.

Ronda Airi, a mother and a nurse in her Kivori community says: "The ground, the sandy type, and when it is a bit of dry season maybe a week, you will see the crops leaves are getting yellow especially the one along here. A lot of work is done on gardening, cutting the grass, digging, weeding the roots out and planting, it takes a lot of time on that and you have to have money to buy food. When it rains, there is a lot of heavy rain, the ground is wet and the food starts getting rotten."

"And when young people go and steal from other people, it does hurt me because to my case there's no one helping me in my gardening. And when I see my bananas or yams are dug out by a person who did not do the hard work and goes around and steal, that brings me anger and I keep complaining why am I here."

57-year-old Anna Bera says it has been a struggle to survive through the seasons, bringing more economic problems to her doorstep.

"When dry season comes it is very hard, we plant on the shade of the sago palms. (During extreme rainfall conditions) our bridge the flood comes and wash it away and the roads and the transports are too hard to go and come, we find it very difficult, it's very hard especially we ladies, men is okay, but us we find it so hard.

We find it hard for money for school fees and buying clothes and our goods to carry to the market. Because no transport we sometimes carry our goods to the Trans (Highway) and we take the other PMV (Public Motor Vehicle) from there and we go for market."

Bera pays K20 for her fare to the city to do her marketing, and the cost of her cargo is K10 per bag.

"We don't earn very much from the market, sometimes if we are lucky we'll earn K50 or K60 and sometimes even K100."

After consultations with the four villages of Kivori, Nakalevu says, "They face droughts, floods, and also various pests, attacks on their crops and they have bandicoots, pigs, wallabies and even frogs, and it is actually causing a lot of problems to their crops affecting their production. On top of that, the Kivori communities are also facing non-climatic related problems, like transportation, for example, is a major issue here; and mismanagement of programmes that have come in. There is also a lot of law and order problems that are creeping up because of unemployment and lack of opportunities for cash employment.

"So these are some of the things the PACC Project will need to take into consideration when designing the PACC Programme for Kivori. These are issues that are very complex in nature and some of them are not project related issues and cannot be dealt with by the project and that the communities themselves will have to deal with these problems. I think this is where ownership needs to come in to the whole equation, so that the people can own the programme and also be able to assist in the sustainability of the whole programme into the future. Otherwise these whole PACC Project will suffer the same fate other project have faced over the years where things are stolen, there are things that are broken down."

He added that it is a challenge for the PACC Project, particularly for the DAL as the implementing agency of the PACC Project in PNG and for Andrew, the PACC National Coordinator to look at how best the project will need to come up with a programme that fits into the daily livelihood and improve the livelihood of the people of Kivori.

"That is the most important aspect of this project. It is a challenge but to be able to deal with this harsh environment here then the PACC Project stands ready to support the Kivori community and DAL, particularly the regional office, to try and move this programme forward."

PACC PNG is enhancing its adaptive capacity in the area of Food Production and Food Security. Further assessments will continue by the DAL on the village of Kivori before the actual on-the-ground implementation is carried out by the end of the year.