Learning about the environment and the Pacific perspective with SPREP

General News
A group of 17 students from universities all across the United States visited the Secretariat of the Pacific Regional Environment Programme's campus on Monday, as part of the School of International Training's "Study Abroad Programme".

The programme, which is guided by the theme "Social and Environmental Change in Oceania", sees them spend a semester of study in the Pacific, starting with a week of orientation and introductory lectures to the Pacific in Hawaii before spending the rest of the 15 weeks in Samoa.

They decided to schedule a visit to the SPREP campus in Vailima as part of their study tour, where they were given presentations from experts in the fields of Climate Change Resilience, Invasive Species and Environmental Management in the Pacific.

The group of students who visited SPREP under the SIT Study Abroad Programme posing for a group photo with some of the SPREP staff.
Photo: SPREP

They were also given a brief look into the history of SPREP by Ms Miraneta Williams-Hazelman, SPREP's Information Resources Centre and Archives Manager.

Mr Roland Pritchett of SIT explained that the programme's previous focus was more on the social development side, particularly on culture and society, but was recently upgraded to include what they believe to be a critical issue for the Pacific, and that is the environment.

"The visit to SPREP was an opportunity to get an in-depth look at the work that's being done in the Pacific in climate change, governance and invasive species," said Mr Pritchett. 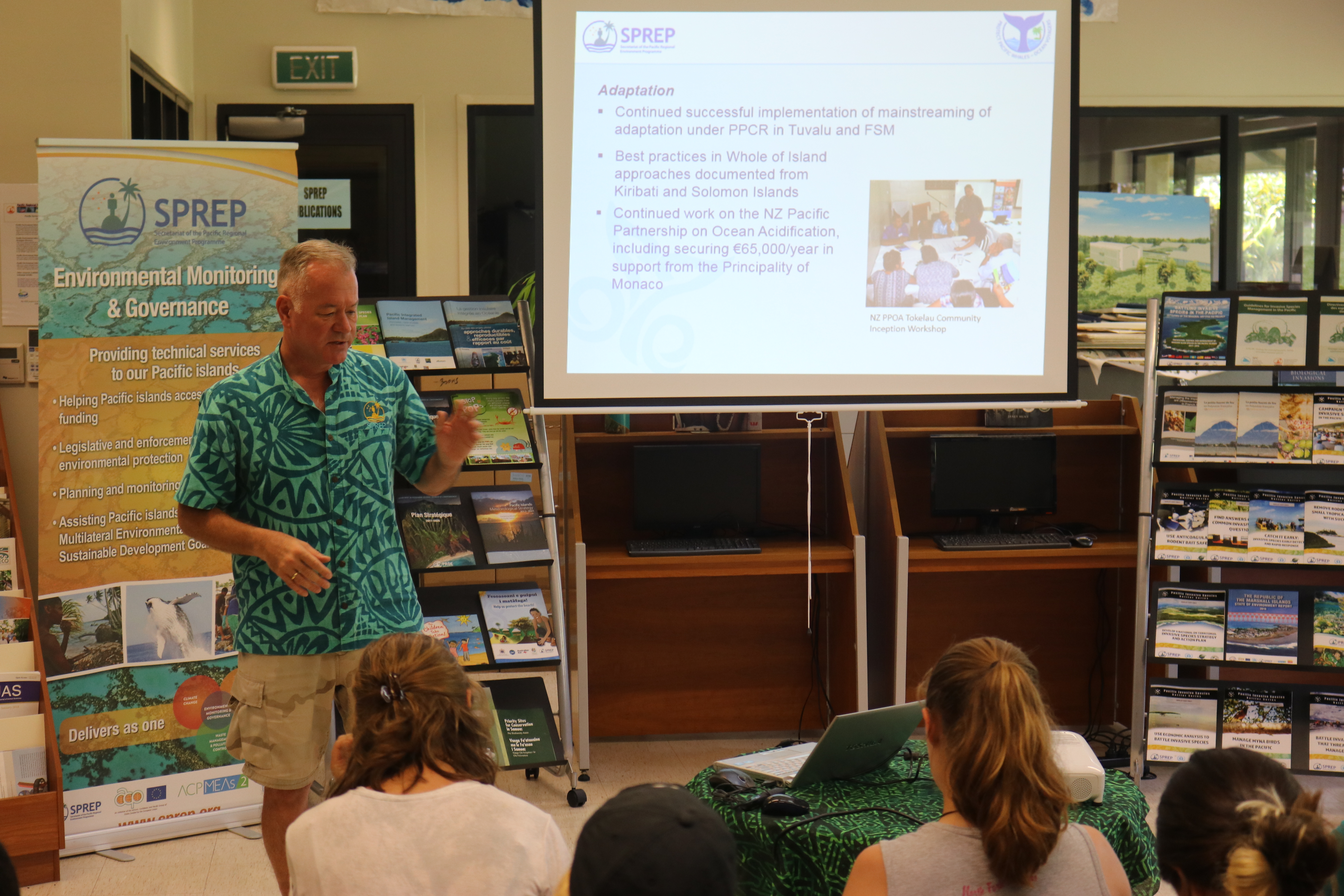 "While these topics are not new to the students, they were able to get an insight into the Pacific's perspective and also what's been done in terms of implementation. Everything from research to policy and implementation proved to be quite interesting to them so they really enjoyed the presentations that were given."

One of the students, Ms Hannah Batista, studies Anthropology with a concentration on global health and environment at Washington University. She shared her thoughts on the group's visit.

"I learned there are a lot of cogs in the wheel that go into implementing policies and it's good to see that there is a collaborative working relationship which exists between SPREP and its member states when it comes to the implementation of these policies in regards to environmental issues within the Pacific region."

Ms Donari Yahzid, a Politics and Anthropology student with a minor in development organisation at Mount Holyoke College Massachusetts, said "I learned about how SPREP as an organisation implements policies in the region in terms of environmental protection and getting the information to the development level so that the people are aware of what's going on in terms of environmental issues such as climate change.

Ms Yahzid also mentioned this was her first time in Samoa, let alone the Pacific and that she has noticed there is much more of a connection between the people and the environment which exists here compared to the US.

The students have been in Samoa for two months and have one more month remaining in their programme before they return to the United States to share what they have learned on the Pacific's perspective.