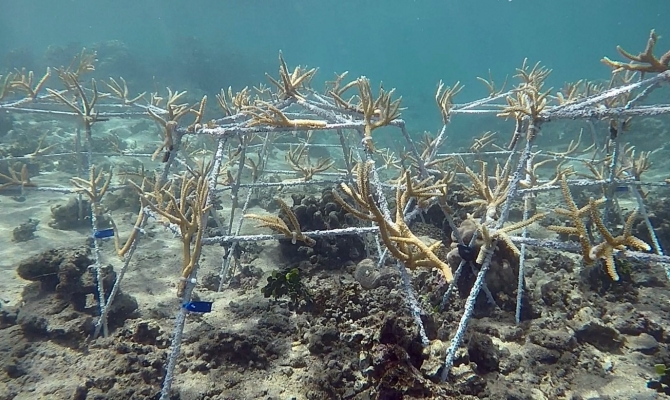 The coral fragmentation restoration structures were implemented on two sites. Five were developed on the Mahina underwater educational trail and five on the Punahina PK18 trail located outside the capital, Pape’ete.

The structures, which aim to replant coral fragments onto a foundation for them to develop into larger reefscapes, are anchored to the seafloor to prevent movement and coral cuttings are attached by zipties. A diver on a weekly basis removes the algae that either grow on or are caught in the structures, in order to give the cuttings the best chances to grow. 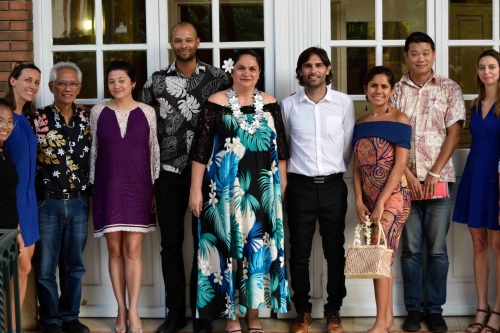 Ms. Fany Seguin, Project Manager of Cerocean said, “Coral restoration structures mainly play a role in creating awareness but can also help restore reefs. One can bring branching corals to places where they were lost and recreate habitat. In areas damaged by tsunamis this can be a very good tool. One can recreate a reef from just a single survivor.”

The Blue Belt Project also provided training for the trail managers of the four underwater trails which were built by French Polynesia’s Ministry of Tourism in early 2018.  The trainings, conducted by Creocean and the Service du Tourisme, taught the trail managers about ecotourism, safety procedures and basic environmental surveying.

In addition to these trainings, the project also provided complimentary educational material such as information booklets on how to easily recognise different species, to be used when there are school visits to the sites.

A video on the outcomes of the Pacific Biodiversity Blue Belt Project can be found here.