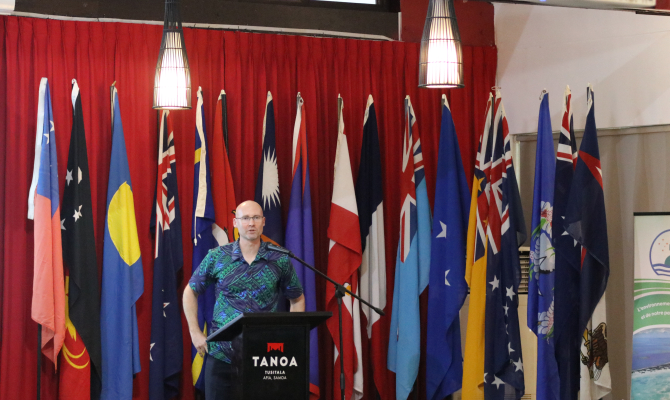 2 September 2019, Apia, Samoa - Participants at the Pacific Environment Forum themed“Circling away from non-essential single-use plastics”, which is part of a build up to the 29th SPREP Meeting of Officials at the Tanoa Hotel were provided an overview of the Australian-funded Pacific Ocean Litter Project (POLP), which aims to work in compliment with existing waste management projects to support the delivery of the Secretariat of the Pacific Environment Programme’s (SPREP) Marine Litter Action Plan, 2018.

The POLP initiative augments Australia’s existing investments to support sustainable oceans in the Pacific, with a funding commitment of “AUD $16 million (2019-2025) dedicated to POLP,” said Mr. Mark Skinner, who has been seconded from the Australian Department of the Environment and Energy to support SPREP’s delivery of the project.

The POLP is a regional project that will support training, industry and community engagement, donor coordination, as well as technical and practical support in response to National Government priorities. POLP will have a strong focus on community awareness campaigns and will seek to establish partnerships amongst various government, community and industry groups to tackle the issue of single-use plastics within Pacific marine environments.

The POLP will place emphasis upon strengthening policy & legislative frameworks, including through the implementation of bans, levies or voluntary measures, as well as other approaches to reducing single-use plastics – for example by identifying eco-friendly, sustainable alternative products.

Currently, the Project is seeking to commence discussions with Pacific island Governments and donor partners, in compliment with detailed budget and implementation planning. POLP has been designed to enable other donors to invest and ‘scale up’ the project geographically, by sector and by activity so that Australia’s contribution can be magnified to provide greater impact across the Pacific on the problem of marine litter.

The Meeting will bring together SPREP’s 21 Pacific island Members countries and 5 Metropolitan Members to discuss strategic issues pertaining to the organisation, and to approve the 2020-2021 work plan. The Environment Ministers’ High-Level Talanoa will be held on Friday 6 September.