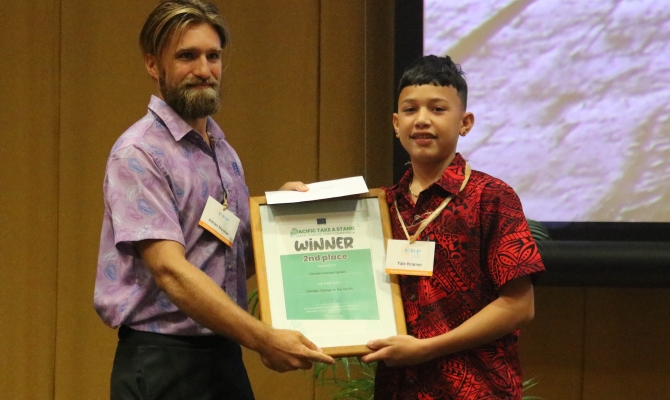 3 May 2019, Suva Fiji - A 15 year old ninth-grader from the Republic of the Marshall Islands, the runner up of a European Union-funded climate change film competition, addressed the Pacific Resilience Meeting (PRM) this afternoon on the challenges his island nation is facing due to the changes in climate.

Mr Yale Kramer submitted a short film on the effects of climate change on the Republic of the Marshall Islands to the Pacific Take a Stand competition which ended last month.

The competition, funded by the European Union, gave people living in Pacific island countries the chance to have their voices heard about climate change, an d to show how it is affecting them and their communities.

Pacific island residents were invited to create a short video that expressed their passion about the effects of climate change in their country or about their feelings on the causes of climate change. It was a chance for them to share what they are experiencing as a result of climate change and how it is affecting them and their community.

Mr Kramer’s entry won second place, amongst a multitude of entries that were received from around the Pacific region.

“The reason why I produced this video was to let people know the sad reality of climate change and sea level rise that my people are currently facing," said Mr Kramer.

"Even in my 15 short years, I have seen sandy beaches getting washed away and witnessed coconut trees leaning to a point where the highest part of the coconut tree touches the lagoon water."

“It deeply saddens me that if climate change continues, the place that I call home will disappear underwater.”

The idea for the competition was hatched in the offices of the Delegation of the European Union in the Pacific in Suva, Fiji, according to Mr Adrian Nicolae, Team Leader, Climate Change/Disaster Risk Reduction, Sustainable Energy and Waste Management.

“We wanted a way to communicate the climate change challenges and issue in the Pacific and do so in a way that the stories are told by regular Pacific islanders and not consultants or climate experts,” said Mr Nicolae.

“Although the timeline was short, I’m happy that we got some powerful messages that also reflect the diversity of the Pacific.”

“We are glad we had the opportunity to bring these messages to the PRM and everyone who attended the meeting had a chance to receive these messages and also to have Yale speak and deliver his views. We may have found a new Pacific climate champion in him,” Mr Nicolae concluded as saying.

Director of Climate Change Resilience of the Secretariat of the Pacific Regional Environment Programme (SPREP) Ms Tagaloa Cooper-Halo, said “It was great to see the perspectives from people living in the most vulnerable Pacific communities being shared through short films. It provides an in-depth and current look into the challenges our people face in their communities every day due to the impacts of climate change.”

“It is my hope that these messages will be seen by all so that they can see and hear about the effects of climate change directly from those who are most vulnerable to the impacts in their own words.”

The first place winner was Mr Berysin Jr Salomon from the Federated States of Micronesia, while the third place prize was awarded to Yata Version from Fiji.

The prizegiving ceremony for the Pacific Take a Stand film competition was held on 3 May 2019, during the inaugural Pacific Resilient Meeting from 1 – 3 May, 2019.