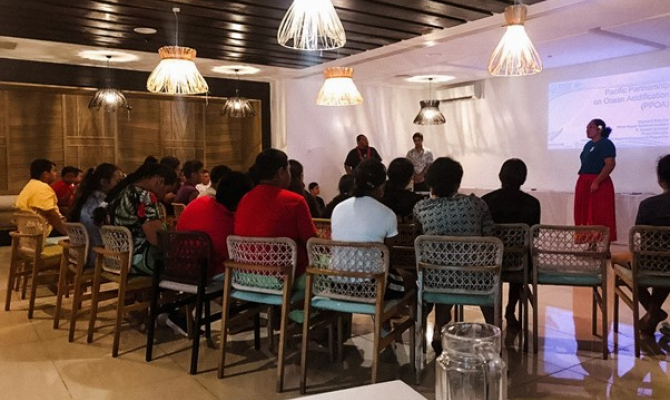 More than 20 Year eight students from Samoa Primary School participated in a Science Camp held at Taumeasina Island Resort on  31 October 2020. The science camp was organised by Samoa Primary School management and teachers in partnership with Artificial Reefs Samoa to stimulate interests in different fields of science.

This outreach for primary level students is an innovative initiative to keep students informed and aware of the issues surrounding ocean acidification, its implications on marine ecosystems, specifically mangroves and corals, and the role we as a community play in building a more resilient environment against ocean acidification.

“We are very grateful to have been given the opportunity to learn about the importance of coral and mangroves. When I heard that mangroves could filter carbon dioxide to produce carbonate for the coral skeletons, I was keen to set a goal to protect the mangroves,”  shared Miss Adrienne Eteuati, one of the students attending the camp.

Other students echoed the same sentiments and wrote letters of acknowledgement to SPREP, sharing what they learned.

The Science camp is connected to current activities implemented by Artificial Reefs Samoa who have been working closely with Samoa Primary School and other schools.  They have worked on establishing coral nurseries and replanting corals at Taumesina in Samoa - their contribution to enhancing community coastal resilience to climate change.

The Pacific Partnership on Ocean Acidification project is a collaborative effort between SPREP, the Pacific Community, and the University of the South Pacific to build resilience to ocean acidification in Pacific island communities. It is funded by the New Zealand Ministry of Foreign Affairs and Trade and the government of the Principality of Monaco.