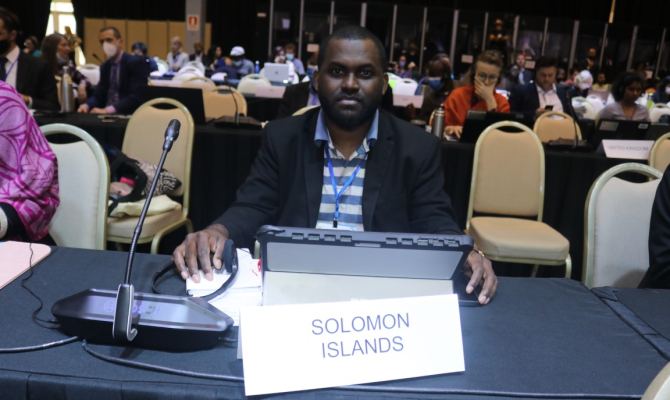 02 December 2022, Punta del Este – All member states of the first session of the International Negotiating Committee (INC1) working to develop a legally binding agreement on plastic pollution, must commit to an open and frank dialogue about their priorities and concerns to create an instrument that prevents, reduces and eventually eliminates plastic pollution.

The call came from Mr. Undi Pelobule Jnr, of the Solomon Islands, who delivered the Pacific Small Island Developing States (PSIDS) statement during the discussion of Standard Articles on Final provisions of the instrument being negotiated at Punta del Este, Uruguay.

He articulated some overarching thoughts on final provisions that could be included in the instrument. On the settlement of disputes for example, Mr Pelobule said the Solomon Islands and PSIDS support the general premise that all disputes must be settled by peaceful means through a robust, efficient and effective procedure.

“The procedure for amending annexes needs to balance flexibility, to accommodate growing data on the impact of plastic pollution on human health and the environment, with the need for stability and predictability in this instrument,” he said.

“In this vein, amendments to technical annexes, if they are included in the instrument, need to be based on the best available scientific information, as well as, in a rights-based manner, traditional knowledge, knowledge of Indigenous Peoples, and local knowledge systems. Procedures for adopting or applying annexes, need to give adequate time for states, and especially Pacific SIDS, to make necessary changes on the national level, before those amended annexes become effective.”

Entry into force is pivotal, PSIDS urged delegates at INC1.

“While universal acceptance should always be the goal, we feel that in this context we need to balance universal acceptance with responsibility, partnership and commitment. Pacific SIDS feel that effective global action to address plastic pollution would only be realised through securing the commitment and partnership from those countries most heavily involved in plastics production,” said Mr Pelobule.

“For the Pacific, the best way to build universal acceptance is through the genuine and thorough engagement of states throughout the INC process.”

INC1 comes nine months after representatives from 175 countries, including Pacific nations, endorsed a landmark resolution on plastic pollution at the United Nations Environment Assembly. Countries then tasked the UN Environment Programme (UNEP) with convening and managing the INC process. A key part of that is happening this week in Uruguay.

The meeting in Uruguay is taking place amidst a mounting plastic crisis that experts say threatens the environment, human health and the economy.