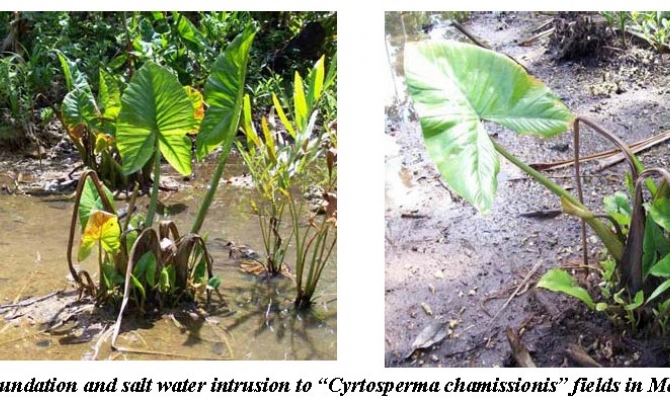 By Ernest Ta'asi for Island Sun in Honiara, Solomon Islands.

Vulnerability and Adaptation Assessments for the Solomon Islands Pacific Adaptation to Climate Change Project, are set to begin this Saturday 16th April, 2011 or early next week.

The Ministry of Agriculture and Livestock, signed a contract late last month with local agency Eastern Development Agency (EDA) to do a climate change survey assessment on the islands of Ontong Java.

Located on the outlying parts of Malaita Province, the atoll islands were the first choice for the climate assessment project in the country because of its low-lying coral formations.

PACC Coordinator Casper Supa said the team's deployment will include land surveys and talks with the communities to verify the focal problems which will be addressed accordingly by the Ministry.

He added, the team will spend one and a half weeks on the atoll islands to assess the problems from drastic climate change effects commonly shared by low coral islands across the region; and within a period of eight weeks they should be receiving feedbacks on the outcomes of the V&A Assessment.

"From the reports it will help us determine the core issue, whether it be problems with water, farming, so we can involve the other ministries such as the Ministry of Environment and Meteorology, NGO's and SIWA; also based on the report will be the decision for resource enhancement or relocation programmes.

The EDA are currently implementing a Climate Change and Food Security Project in Ontong Java and a number of baseline studies have already been carried out by the agency.

The V&A team will comprise of representatives from the Ministry of Fisheries, Ministry of Agriculture Research and Ministry of Environment Climate Change and Disaster Management (MECDM).

After the full assessment of Ontong Java, Sikaiana (also located in Malaita Province) and Fenualoa (Temotu Province) will be next.

The sites are chosen based on the vast changes experienced by the islands because of the low elevation against the sea level.

The PACC Project nationally implemented by the Ministry is focusing on Food Production and Food Security adaptation intervention in the country.