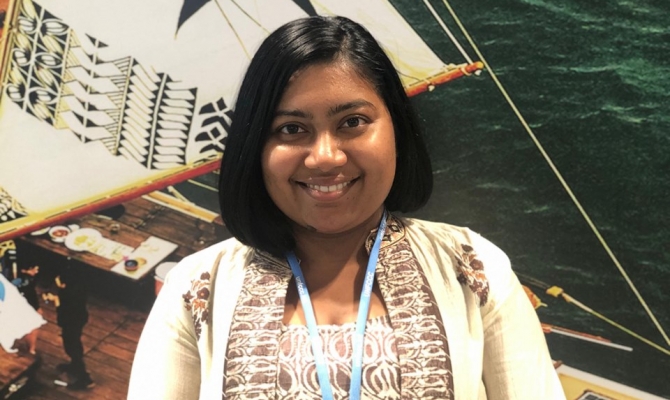 We hope you enjoy this series getting to know more of our Pacific Island negotiators and delegates.

Q: How did you come to be involved in the climate change space?
A: My journey started when I did my Postgrad. That was in 2015 and it was during the lead-up to Paris and all of my units at that time were on climate change and climate diplomacy so I got involved with the Suva Declaration work and joined the student delegation to Paris and that’s where it all started.

Q: What is an issue or issues of importance to you country and to the Pacific that you’ve been following here at COP25?
A: I’ve been following Loss and Damage since 2015 and it’s a very interesting issue to me because of the power dynamics between developed and developing countries and how our Pacific leaders are able to champion the issue and move progress forward.  In the lead-up to Paris, we had the Suva Declaration Summit in Suva where Former President Anote Tong stood up and said, “We need Loss and Damage in the Paris Agreement. We need to be able to talk about this.” The United States Ambassador at the time replied that anything that says Loss and Damage is not going in the Paris Agreement so I thought this was a very interesting issue to follow and it was amazing how Pacific leaders, particularly Tuvalu in Paris were able to get it as a separate article in the Agreement.

Q: What advice would you have for young Pacific islanders who would also like to be involved in this space?
A: Particularly for Pacific island youth, we’re all experiencing climate change, we all encounter it in our daily lives at some point, and no one else can tell your stories better than you can and your story is an important one because it shows that this is an issue that is affecting us now and will affect future generations and that is something that must be dealt with urgently.