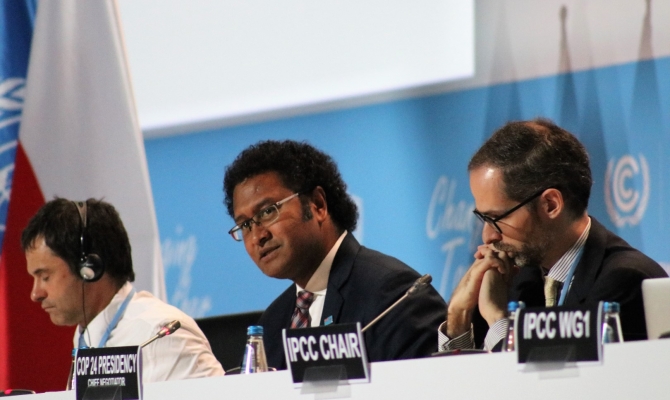 Global cooperation was celebrated in 2015 with the Paris Agreement (PA), the new international climate agreement,  which starts in the year 2020.  This agreed to hold the increase in global average temperatures to well below 2ºC above pre-industrial levels and to ensure that efforts are pursued to limit increase to 1.5ºC.

Discussions at the UN Climate Change Conference this week will see the development of the Paris Agreement Rulebook that brings the Paris Agreement to life, outlining how climate action will be carried out and accounted for by all Parties, to achieve the PA goals.  This includes guidelines on how to track the national commitments made to reduce greenhouse gas emissions as well as how to communicate the climate actions undertaken at the national level.

While week one is over, it’s this coming week in which we’ll be able to see telling progress on the UN Climate Negotiations.

We spent time with Ambassador Luke Daunivalu, Fiji’s COP23 Chief Negotiator at the Climate Conference in Katowice to find out how the Climate Change negotiations were going.

Q: Now at end of week one and going into the final week of the negotiations, how much progress has been made?

Ambassador Luke Daunivalu:   “The progress of the negotiations for the Paris Agreement Work Programme has been moving forward for the last few days but the status of this is there is a lot to be desired.  There is not a lot of agreement on the key issues of finance, adaptation, and transparency but there could be on adaptation and mitigation.  So we are seeing small successes in the non-Paris Agreement items, but where it really matters are the items that will operationalise the Paris Agreement.  We are getting stuck with new proposals coming in at this late stage when we should really be having a text that people can negotiate.  The text we began with was over 300 pages long and we haven’t gone too far further since then.”

A key document on the table for consideration at the COP24 is the Special Report on 1.5ºC by the Intergovernmental Panel on Climate Change.  The scientific report outlines the differences of a world in which global warming has been limited to 1.5ºC as opposed to that of 2ºC.  Released in October this year, the report outlines three key aspects – 1. That while the world is in a dire state at 1.5 ºC it will be much worse at 2ºC.  2. That the Small Islands Developing States were justified in their call to include the 1.5C in the Paris Agreement and 3.  That limiting at 1.5ºC is still feasible, it requires urgent action from all while the window for opportunity is still open.

It is at COP24 that Small Islands Developing States Parties are calling for the IPCC Special Report on 1.5ºC to be welcomed in the outcomes and decisions of the COP24.  The Alliance of Small Islands States (AOSIS) were strong in calling for the language to be incorporated in the Paris Agreement.  Here at COP24 AOSIS continue their call for the IPCC Special Report on 1.5 to be welcomed in the COP24 outcomes, so the report remains on the table for consideration in all future work on climate action.

Q.  There has been a call from the Pacific islands and other Small Islands Developing States for the IPCC Special Report on 1.5ºC to be featured in the decisions coming out of COP24, does it look like that will happen?

Ambassador Luke Daunivalu: “At this point it’s hard going to get agreement on the word ‘welcoming’ the IPCC special report on 1.5ºC.  There are other important elements that are in the different decisions on the Warsaw International Mechanism for Loss and Damage associated with Climate Change Impacts, Research and Systematic Observation, on other related items that reference the IPCC special report and they need to be agreed here in order to make the work for the coming years to move forward.”

One of the mandates given to Fiji and Poland as the Presidency’s of COP23 and COP24 was the coordination of a facilitative dialogue to do a stocktake of three key areas to achieve the goals of the Paris Agreement.  In particular the answering of three questions 1. Where are we now, 2 Where do we want to be and 3. How do we get there?  Named the Talanoa Dialogue, this initiative was launched in December 2017 with a range of activities underway this year to hear the voices of a wide range of people.  All feedback was collated into a report which has been shared to provide the foundation for the next stage of the Talanoa Dialogues, a series of high level roundtables which will happen during week two of COP24.

Q.  Will there be a space for the Talanoa Dialogue process to continue after COP24?

Ambassador Luke Daunivalu. “There are two key aspects of the Talanoa Dialogue.  One is the outputs and the outcomes of this year-long process for which some of the outputs would be the Synthesis Report, Summary of the Talanoa Dialogues in May in Bonn the first ever in the climate change process, and other reports coming out such as the IPCC Special Report on 1.5ºC.  We are hoping for the COP24 to have a decision that recognises the mandate given to COP23 and COP24 Presidencies as being fulfilled.  Of course we want to invite and urge all Parties to use the information, the rich experiences that have been shared through the Talanoa Dialogue process this year in the preparation of enhanced Nationally Determined Contributions.  That is one aspect.  The other is the Talanoa Dialogue model itself which may or may not be reflected in the decision of COP24 but in practice and in reality, we really want Parties and all stakeholders to use it because we have seen how effective it has been this year in bringing together academia, the scientific community, the business sector, the civil society and government to share their experiences.  It’s not pointing fingers at anyone but it is encouraging to hear individual participants talk about what they are doing and the challenges they are facing when it comes to climate change action and impacts.  Those are the things we hope and we would welcome that it continues way beyond 2018 and I think that is something that people are already talking about.”

This week the crunch is on with week two of the UN Climate Change negotiations is now underway in Katowice, Poland.  The “asks” from the Pacific and Small Islands Developing States are still being negotiated.

Also to take place this week is the High Level Talanoa Dialogue sessions in which the Ministerial level are sharing their voice which will lend to the COP24 decision outcomes.

For more information on the following please visit the below links:

Key facts on the IPCC Special Report on 1.5ºC: https://climateanalytics.org/briefings/15c-key-facts/

Interview was conducted on Saturday, 8 December, 2018