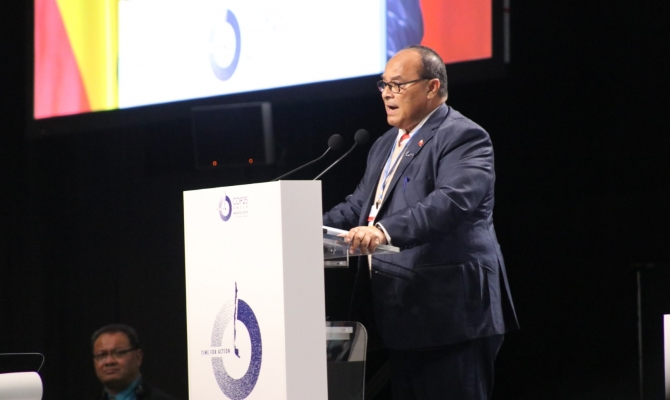 10 December 2019, Madrid, Spain - The Kingdom of Tonga is amongst the top three of over 170 countries that are at risk, as according to the World Risk Reports since 2016.

From the world stage at the Twenty-fifth Conference of the Parties to the UN Framework Convention on Climate Change (UNFCCC COP25) today the Prime Minister of Tonga shared how the Pacific island continues to experience record rates of coastal erosion, overflow and flash flooding.  This is further compounded by the rising in sea-level, three times higher than the global average.

“We have Tropical Cyclones that are increasing in intensity, and at a rate that undermines our capacity to respond to, and recover from.  Tropical Cyclone Gita which hit Tonga in February 2018 is a strong testament to this increase,” presented Hon Pohiva Tu`i`onetoa, Prime Minister of Tonga during the High Level Segment of the UNFCCC COP25 in Madrid, Spain.

“The effects of climate change continue to threaten the environment, land, the ocean and the marine resources, upon which, the livelihood and existence of our people, depend very much on. In the course of time, and as, science tells us, these impacts are rapidly intensifying our vulnerabilities, and swiftly eroding our capacities for resilience.”

Despite being from a Pacific region in which Tonga contributes to less than 0.006% of the World’s total greenhouse gas emissions, Tonga is committed to ensuring the rapid progression of achieving its Nationally Determined Contribution Target of 50% renewable energy by 2020.  This will be followed by at 70% target by 2030 and then 100% by 2035 which will also improve energy efficiency through reducing losses of electricity lines.

Tonga is also committed to preparing its Long-Term Low Emission Development Strategies which will be communicated to the Twenty-sixth Conference of the Parties next year.

“The Paris Agreement was a first step, by the global community toward ensuring the very survival, of not only the Small Island Developing States, but also the planet we all call, home,” stated Prime Minister Tu`i`onetoa.

“We are here, to progress our work, under this Landmark Agreement, and to stand in solidarity, with all of the Small Island Developing States, in recognition of this year´s COP theme, urging all countries, that the “Time for Action is--- Now!”

At the global level, when it comes to climate action and raised ambitions Tonga is calling upon genuine commitment and cooperation from governments, development partners and Parties that are fully engaged in the implementation of the Paris Agreement, the Sendai Framework, Sustainable Development Goals (SDGs), and the SAMOA Pathway, to limit global temperature increase to 1.5 Degrees Celsius.

“It is with the hope, that this COP25 is a testament to the genuine partnerships and collective responsibilities of all parties, in raising their ambition and actions towards achieving the goals, of the Paris Agreement,” said the Prime Minister of Tonga.

“Civil society, Academia, and the private sectors, must continue to be steadfast in their coordinated roles, in ensuring genuine accountability, by the state actors, and continue to be the solid drivers, in our search for further solutions, to the continuing adverse effects of climate change.”

Hon Pohiva Tu`i`onetoa, Prime Minister of Tonga was the second speaker at the High-Level segment upon conclusion of the official opening.