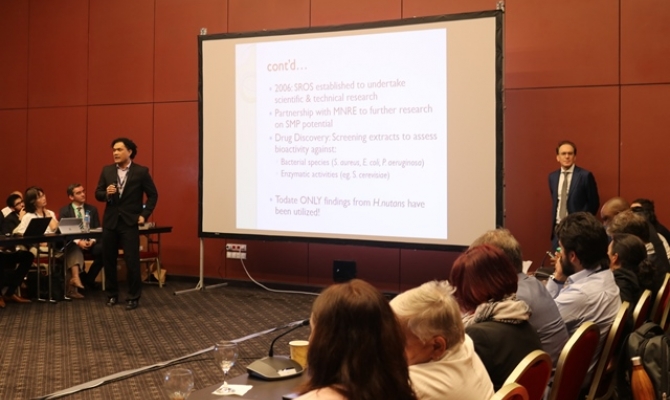 Aichi Biodiversity Target 16: By 2015, the Nagoya Protocol on Access to Genetic Resources and the Fair and Equitable Sharing of Benefits Arising from their Utilization is in force and operational, consistent with national legislation.

18 November 2018, Sharm El Sheikh, Egypt - The Cook Islands and Samoa are featured in the new publication ABS - Genetic Resources for Sustainable Development that was launched during the 14th Conference of the Parties to the UN Convention on Biological Diversity (CBD COP14) in Sharm El Sheikh, Egypt.

The publication shares stories from across 27 different countries focused on how their genetic resources and associated traditional knowledge have helped people by implementing the principles of the CBD Nagoya Protocol on Access to Genetic Resources and the Fair and Equitable sharing of Benefits Arising from their Utilization.

The Samoa case study focused on work by the Scientific Research Organization of Samoa in collaboration with the Ministry of Natural Resources and Environment (MNRE) researching Samoan medicinal plant materials to provide scientific evidence that they can help prevent certain illnesses.

In 1973 a pharmacological study on 34 Samoan medicinal plants showed extracts had antibacterial, anti-viral and anti-tumour activities. In 1989 another study on 74 medicinal plants detected bioactivity which is an indication that species have the potential for medicinal purposes.

In 2014 further research on plants continued on screening bioactive compounds from both plant and marine species to assess the reaction of some specific enzymes.  This was supported by the Government of Japan through the mentorship of Japanese pharmaceutical expert, Professor Kenji Sakamoto. These enzymes were selected as they play key roles in metabolic disorders such as diabetes, obesity and skin de-colorisation.

“Samoa’s biodiscovery development was a slow process due to lack of resources and capacity in the early days, so we relied heavily on external technical and scientific research assistance to help with preliminary studies on our Samoan plants,” said Seumaloisalafai Afele Fai'ilagi, Assistant Chief Executive Officer of the Samoa MNRE at the launch of the publication at CBD COP14.

“The Scientific Research Organization of Samoa (SROS) was established to achieve the Government’s vision to strengthen our local scientific research capability, and we are appreciative of their leading role in biodiscovery scientific research of our local plant species.  Working together with MNRE we were able to conduct further research on the potential to reduce disease infection and, as potential inhibitors of enzymes that initiated illness.”

Biodiscovery is the process of identifying biological compounds that have the potential for medicinal benefits.  Bioprospecting is the search for plant and animal species from which medicinal drugs and other commercially valuable compounds can be obtained.

“The Samoa case study on its medicinal plants  is closely linked with our local traditional knowledge and presents an interesting case for Samoa with the plant Psychotria insularum, or Matalafi in Samoan,” said Seumaloisalafai Afele.

“As a traditional medicinal plant, the Matalafi is one of 11 plants to have undergone screening and found to  have the most bioactivity and, interestingly enough, Matalafi also helps the supernatural induced ailments or sicknesses that people attribute to being caused by ghosts or spirits.”

Although Samoa has done extensive work researching its plants for bioactivity this research is still in its early stages and we cannot forecast the commercial value as yet.

Prior to the adoption of the Nagoya Protocol, Samoa had provisions in place for bioprospecting in the late 1980s, although having signed and ratified the Nagoya Protocol in 2014 it is now working on a national legal framework that is in its final stage of development.

“We have much more work to do.  We are in the thick of it now, and with the promise our research has shown us thus far, we are thankful for the collaboration and partnerships we have with relevant stakeholders that may be able to take this research further,” said Seumaloisalafai Afele.

“With the Nagoya Protocol in place, and implementation happening through the UNDP-Global Environment Facility Global Access and Benefit Sharing project for Samoa, tour national ABS framework will be developed and strengthened. This will implement a transparent and fair process, as well as procedures for bioprospecting in the country.  This includes ensuring that any benefits that come from research findings will be equally shared amongst those that own this knowledge and genetic resources.”

Further information on Samoa’s work is detailed in the newly launched publication.

The ABS is Genetic Resources for Sustainable Development Book was launched during a special event of the CBD COP14 on Friday, 17 November, 2018.

For further information on the event please visit: http://enb.iisd.org/biodiv/cop14/side-events/17nov.html#event-3

For a copy of the book please visit: http://www.ec.undp.org/content/dam/ecuador/docs/documentos%20proyectos%20ambiente/UNDP-WEB-Publication-ABS-is-GR-for-SD_compressed.pdf