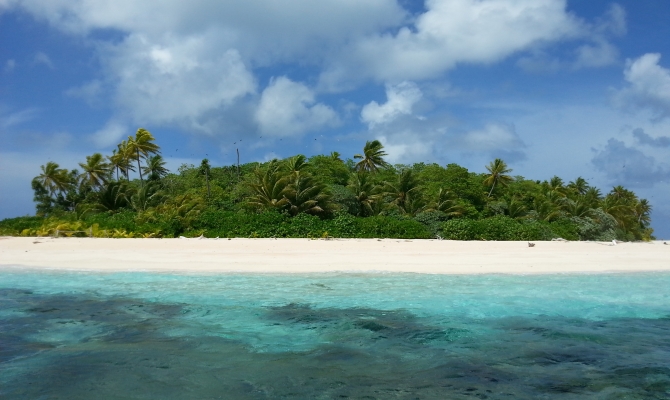 To support Tuvalu's conservation initiatives a national technical workshop was held on 17 October 2018, engaging protected area stakeholders from government agencies, donor funded projects and NGOs. The purpose of the workshop was to initiate action to consolidate and improve national data and information on the country’s protected areas.

The workshop was co-organised by the and the Tuvalu Department of Environment and Secretariat of the Pacific Regional Environment Programme (SPREP) as part of the Biodiversity and Protected Areas Management Programme (BIOPAMA) -. The national workshop followed the BIOPAMA regional inception for the Pacific (June 2018, Apia, Samoa), which recommended expanding country visits to improve availability of protected area informationthat is a key activity of the Pacific Islands Protected Area Portal (PIPAP).

PIPAP is hosted by SPREP and functions as one of the regional ‘observatories’ of the BIOPAMA Programme throughout the African, Caribbean and Pacific regions. It is the region’s one-stop resource hub to support decision-making, more effective protected area management and governance, and biodiversity conservation in the Pacific region. In this context, SPREP is working closely with government members to help collate and improve their PA data to improve decision making.

“The workshop enabled us to have a common understanding of protected areas in Tuvalu, an appreciation of the issues and challenges faced at national level, and provided the ideal setting for key stakeholders to review and update Tuvalu’s current protected area data. Furthermore, it provided an opportunity for us to become familiar with the Pacific Islands Protected Area Portal  and linkages with other data collection initiatives…sincere thanks and appreciation is extended to SPREP, IUCN Oceania and the ACP-EU BIOPAMA Programme for making this national technical meeting possible”, said Mr. Soseala Tinilau, Director of the Tuvalu Environment Department.

A live demonstration and training on the main features, functions and basic navigation of the PIPAP was one of the highlights of the workshop and stimulated good discussion, particularly on the quality of Tuvalu’s protected area data in the World Database on Protected Areas (WDPA).

Another highlight of the meeting was the timely opportunity to review and update Tuvalu’s Protected Area List with stakeholders.

“The discussions and exchanges ended on a positive note. There is now greater understanding of  global Aichi Target 11 on protected areas, its linkages with regional and national goals, and priorities as embodied in Tuvalu’s NBSAPs and Target 11 Road Map. Furthermore, there is greater awareness of key stakeholders of action needed towards achieving this target and the roles they play in this respect, particularly as they relate to data and information.” Said Mr. Vainuupo Jungblut, Protected Areas Officer at SPREP.

The technical meeting concluded with the main priority follow up action of finalizing Tuvalu’s protected area list. Other issues to keep on the radar included further work to demarcate conservation area boundaries through Tuvalu’s Ridge-to-Reef Project, the need to standardise terminology and definitions of protected areas at the national level, the current review of by-laws for each island and the need to clearly define the meaning of coastal, lagoon, inshore and offshore in the context of Tuvalu’s conservation areas.

Defining the term ‘Protected Area’ in the context of Tuvalu was another issue that was discussed. “There are so many definitions out there and so there is a need to ensure that the definition suits the needs of and the sustainability of resources for all Tuvaluans. In addition, there is a need to standardise the scientific terminology used as we would like to translate these into the Tuvaluan language in the future”, said Ms. Tilia Tima, Biodiversity Officer of the Tuvalu Environment Department.

Similar national engagements took place in September in the Cook Islands and others will be organized in the following months in collaboration with other Pacific Island States.

The meeting is a partnership between the Tuvalu Environment Department and SPREP through the BIOPAMA programme an initiative of the African, Caribbean and Pacific (ACP) Group of States financed by the European Union’s 11th European Development Fund.  BIOPAMA is jointly implemented by the International Union for Conservation of Nature (IUCN) and the Joint Research Centre of the European Commission (EC-JRC). In the Pacific region, BIOPAMA is implemented by IUCN’s Oceania Regional Office (IUCN ORO) in partnership with the Secretariat of the Pacific Regional Environment Programme (SPREP).
The partnership between IUCN ORO and SPREP has seen the enhancement of the Pacific Islands Protected Area Portal (PIPAP), the ‘one-stop shop’ for all information on Protected Areas maintained by SPREP with partners and Members.