Work to address marine plastic litter gets off the ground 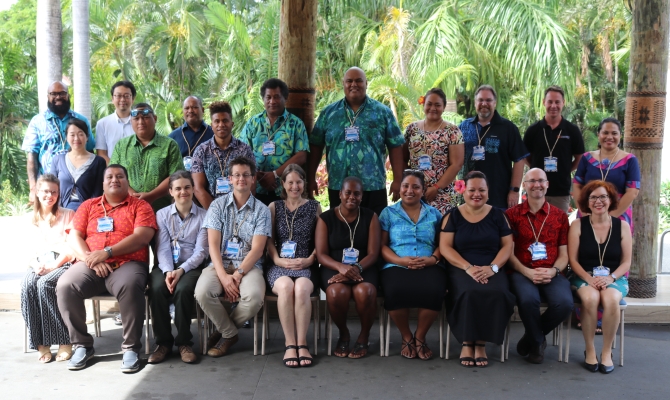 “Tuvalu is a country that relies heavily on the ocean therefore, management of marine litter is crucial.” - Mr. Walter Pulogo, Acting Director of Tuvalu’s Ministry of Local Government and Agriculture.

This is the vision behind the Pacific Ocean Litter Project (POLP), a six-year AUD 16 million project, which aims to complement existing waste management projects to support the delivery of the Secretariat of the Pacific Regional Environment Programme (SPREP)’s Pacific Regional Action Plan on Marine Litter 2018.

Each year, at least eight million tonnes of plastics enter the ocean. It is estimated that there are at least 51 trillion micro-plastic particles already in our ocean, with marine litter harming over 600 marine species. Approximately 80% of that marine litter originates from land-based sources, which inputs from shorelines or through rivers and wastewater pipelines, with the most prevalent types being plastic materials.

As Large Ocean Island States, and as custodians of the world’s largest ocean, Pacific islanders’ livelihoods rely heavily on the ocean. Marine plastics threaten the very livelihoods of Pacific island peoples who are dependent on coastal systems for food, trade and tourism. This has prompted Pacific island leaders to deliver commitments to fast-track the development of policies to ban the use of single-use plastics and polystyrene packaging.

The Leaders acted on those commitments and officially endorsed the Pacific Regional Action Plan on Marine Litter at the 2018 Pacific Islands Forum Leaders Meeting in Nauru.

In its desire to assist Pacific island countries with the implementation of agreed actions under this Action Plan, the Australian Government initiated POLP, which is funded by the Australian Department of Foreign Affairs and Trade (DFAT) through the Australian Aid Programme.

The project’s inception workshop is being held in Nadi, Fiji this week, bringing together representatives from Pacific island countries and territories, as well as experts on waste management, to inform them about the project design and planning arrangements, and to provide an opportunity for feedback.

The workshop will also outline the intended approach for the delivery of key national and regional-level activities under the project that will promote the ongoing, effective coordination of aligned efforts to address the issue of marine litter within the Pacific.

“Australia recognises that the Pacific ocean, and indeed the world’s oceans, face multiple stresses and challenges, and that the ecological health and biodiversity of the ocean is under pressure from overfishing, plastic and other pollution, coastal development, and climate change,” said Mr. Dominic Rasnan-Cooper of DFAT.

“The POLP is going to be a critical project for Australia, and we are optimistic that this inception meeting will be a productive forum for sharing ideas, improving linkages to other donor activities, and most importantly in hearing from Pacific island countries about their priorities,” he concluded.

Dr. Vicki Hall, Director of SPREP’s Waste Management and Pollution Control programme, spoke of the importance of the project at the inception meeting, and the opportunity it presents not only for individual SPREP’s Members, but for the Pacific regional collectively.

“The POLP represents an excellent opportunity for the Pacific region to build upon the effort and achievements to date at national levels. It will compliment other key waste management activities – including aligned Waste projects being delivered by SPREP and key regional events such as the Our Oceans conference in Palau in August, and the Clean Pacific Roundtable in New Caledonia in October.”

“Additionally, POLP will be instrumental in assisting SPREP to develop a stronger picture of the gaps and opportunities that exist across the region, which will in turn, enable SPREP to advocate for further support, including at bilateral levels, with other donors beyond the Australian Government, to engage with each country and fund domestic efforts.”

Acting Director of Tuvalu’s Ministry of Local Government and Agriculture, Mr. Walter Pulogo, said, “Tuvalu is a country that relies heavily on the ocean, therefore, management of marine litter is crucial. We get our food from the ocean and it is also the major income earner, so managing marine litter will greatly improve the economy of our country and this project will contribute significantly to that.

The project was first introduced to Pacific representatives at the PacWaste Plus inception meeting in May 2019, and again at the 29th SPREP Meeting in September. The inception meeting represents the first opportunity for in-depth consultations with Pacific island countries.