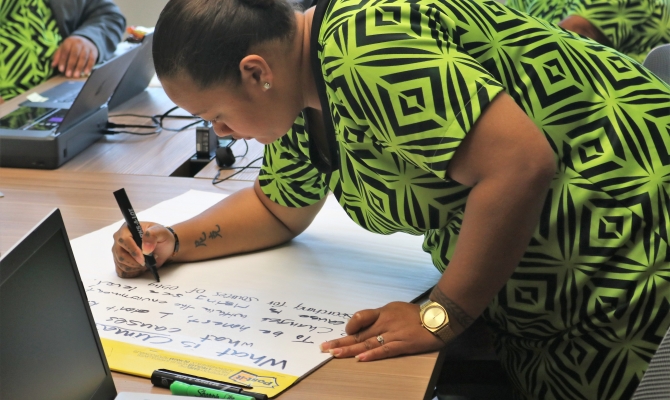 This is the third time since American Samoa are host of PRiMO, also known as the Pacific Risk Management `Ohana Conference.  PRiMO was last in American Samoa in 2013, with the conference predominantly held in Hawaii.

The media Mana Class on climate resilience and Pacific risk management was one of five pre-PRiMO trainings to take place.  Also held was training on natural disaster awareness for caregivers, disaster resilience for small business and organisations, incident response to terrorist bombings as well as prevention and response to suicide bombing incidents.

“This media Mana Class was a very fruitful training with strong engagement and discussion,” said Ms Nanette Woonton of the Communications and Outreach Unit at the Secretariat of the Pacific Regional Environment Programme (SPREP), facilitator of the training.

“The session was about providing American Samoa media members with knowledge of climate resilience so they are better able to share this information in the best way so their audiences can understand more of this issue that will impact everyone.”

A special session was held on the PRiMO held across 24 – 26 September to help media members learn more about this event of which the theme is Fafauina o se alafua e toe fausia ai Amerika Samoa – Weaving a Path to “Precovery” in American Samoa.

The PRiMO will visit the 2009 tsunami and its impacts and how the nation has rebuilt itself, sessions will also look at the impacts of Tropical Cyclone Gita as well seek feedback and input into the American Samoa Technical Assistance Guide for the United States National Disaster Recovery Guide.

“For me I learned a lot from it, not only that we talked about climate change but also other key environment issues are important to learn from to take care of our future,” said Ms Diane Folasa of KVZK TV of the Office of Public Information of American Samoa.

“This training has really given me the idea of how climate change is real.  I have known and seen the impacts, but the training this morning has given me an idea of how to prepare and how to prevent certain things that are happening in our community and our island, American Samoa as well as our Pacific Island region, because we are all part of it,” said Mr Tautalaso’o Letalu of KVZK TV of the Office of Public Information of American Samoa. - #ASPRiMO19

The Pacific Risk Management `Ohana (PRiMO) Conference is being held from 24 – 26 September 2019 at the American Samoa Community College in Pago Pago, American Samoa. For more information on PRiMO please visit https://coast.noaa.gov/primo/conference/ or https://primo2019.uhtasi.org/